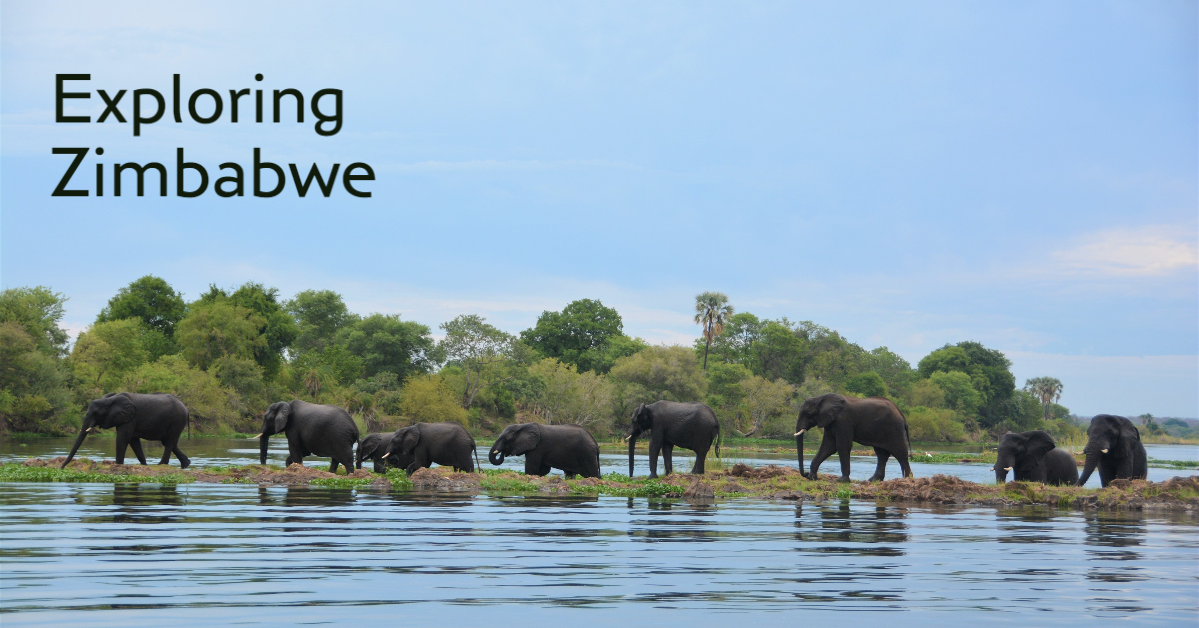 I tend to write about Africa a lot, partly because I feel so connected and incredibly fascinated with nature when I am there but also because I’ve been fortunate to travel to this incredible continent several times.  On my last visit, specifically to scout out new itineraries for future tours, I travelled with ease between the borders of four countries, Zimbabwe, Zambia, Botswana and Namibia.

Most who arrive in Zimbabwe fly into the town of Victoria Falls and that is where I met up with those who would become my travel mates for the next 12 days.

The iconic falls, known to natives as Mosi-oa-Tunya “The Smoke Which Thunders, and named by David Livingstone after Queen Victoria, is one of the Seven Natural Wonders of the World and a UNESCO Heritage Site.  It’s one of the largest falls in the world (Angel, Niagara, Iguazu) and attracts an average of one million visitors annually. It has both wet and dry seasons and the volume of water flowing over it at any given time is determined by the weather in the catchment areas upstream along the Zambezi River in Angola, Botswana, Namibia and Zambia.  I was viewing these miraculous falls in early December, typically the beginning of the wet season, but the rains were later than usual, and therefore the water levels were very low.  Many controversial new articles were circulating online and in newspapers around the world that the falls were drying up, and yes, they were low but not at record lows.  When speaking to locals, the lack of water was nothing more than a cyclical event that soon would pass.  Unfortunately, the negative news equated to a lack of tourists and a downturn in the local economy, particularly tough for those who rely on tourism to survive.  As I write this blog in April 2020, the water levels have not only returned but have surpassed their seasonal average.

There is still a debate over when is the best time to see the falls, but our guide suggested that the lower water levels offer better viewing for pictures.  During the thunderous wet season, there are many areas where taking a camera or cell phone would not be possible due to the heavy mist in the air.  The most impressive and popular way to see the falls during the high season is by helicopter.  We didn’t have time for a helicopter flight but we did get a chance to view these remarkable falls from both the Zimbabwe side (most popular) and the Zambia side and I highly recommend you take in both if you can fit it into your itinerary.

Yes, there were some areas of the falls that were dry, but they were impressive nonetheless and provided perspective on how high these falls really are. 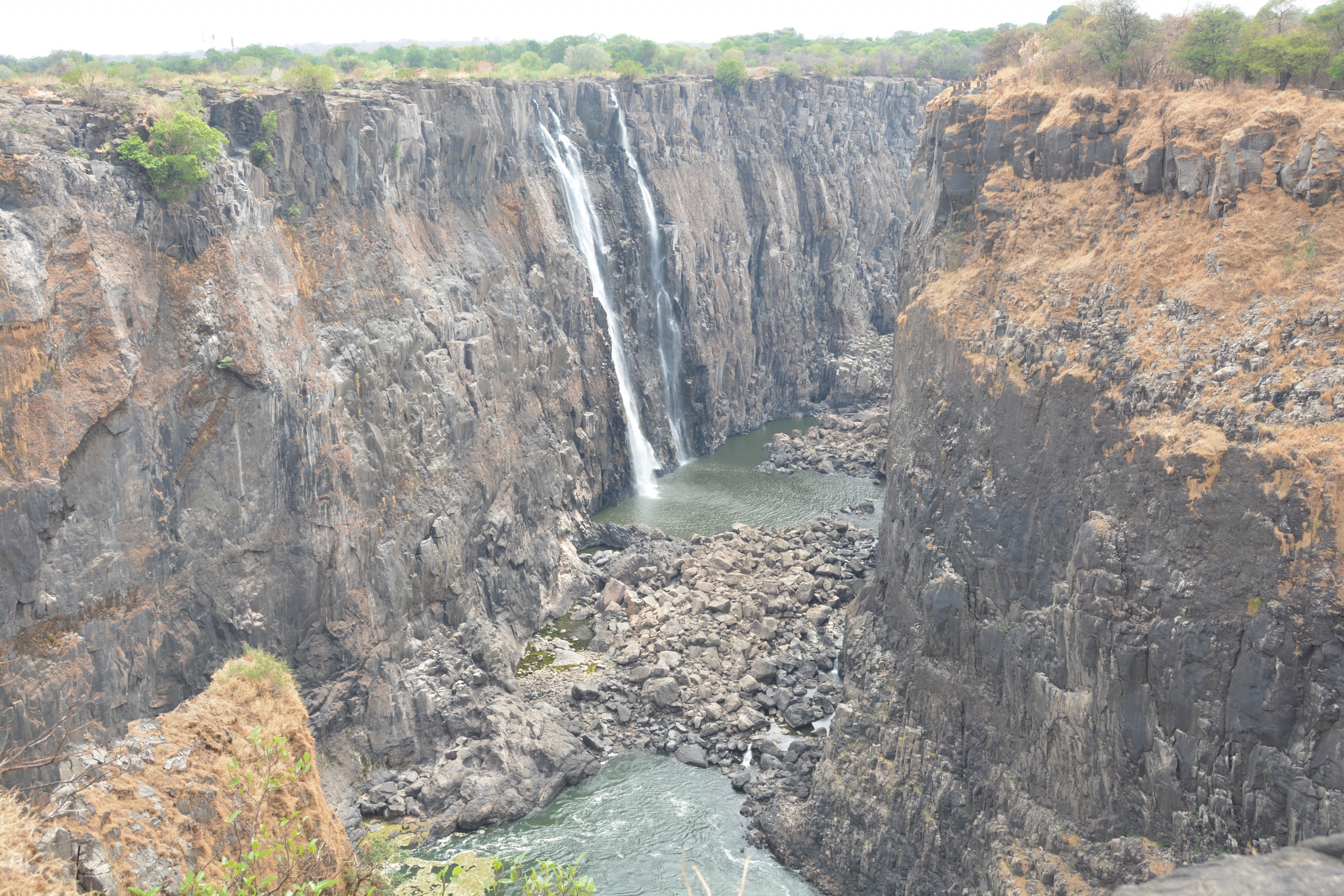 One “must do” activity is a sunset cruise down the Zambezi River.  There are a variety of boat options, budget to luxury, small to large and most include beverages and appetizers.  My preference is a smaller boat, which allows guests to get closer to the banks of the river for better wildlife and bird viewing.  Our group had exclusivity to the boat, complete with champagne and Zimbabwe culinary delights – a lovely touch to an authentic experience.  The Zambezi River divides Zimbabwe and Zambia and boats from both countries are free to travel in the same channels of the river.  The river is full of wildlife and nature was kind to us, displaying an abundance of hippos in the water, a crocodile on the bank and a vast variety of birds.  The highlight, an amazing stroke of luck, was a herd of elephants that crossed the river right in front of our boat!  Our timing was perfect to observe these majestic animals swimming from one side of the river to the other – an incredible experience and one I will never forget! 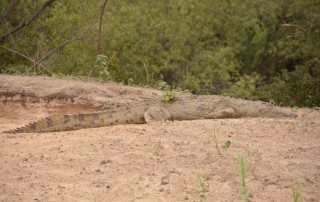 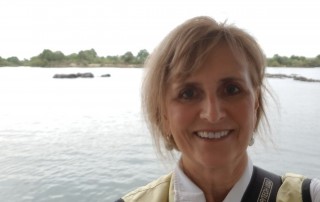 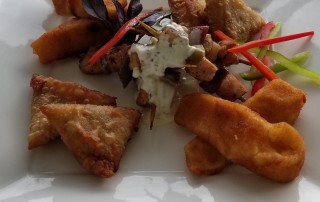 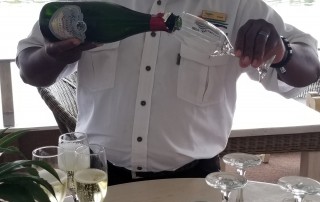 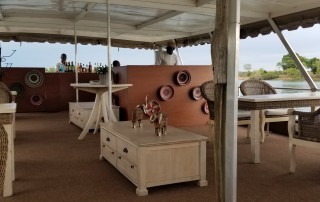 Another activity that was well worth the visit was the Victoria Falls Wildlife Trust.  This organization focuses on four specific areas to promote wildlife management, rescue and re-habitation, wildlife research, wildlife disease and community outreach.  The outreach program was particularly interesting to me.  Their approach is to educate the local villagers about a sustainable eco-system and the importance of the animals.  Instinctively local farmers want to kill a lion that attacks their cows or an elephant that destroys their crop.  The Wildlife Trust team educate communities on how to work in harmony with animals.  For example, they teach them to plant chili plants around their crops to deter the elephants.  Elephants hate chilis and because of their good memory, if they are exposed to the pungent smell, they are not likely to return.  The Wildlife Trust also provide villages with a potato gun, and ping pong balls filled with chili oil.  When an elephant approaches the villagers will use the gun, and the chili oil, while harmless, will be enough for the elephant to recede.  Another program, designed to protect livestock and lions, are portable canvas bomas, large enough for an entire village to secure their livestock in the evenings.  Lions only hunt and catch what they can see, so they will walk right by the boma without attacking.  This project has been very successful.  In the villages that have been provided with bomas, no cattle have been lost since the project was implemented and no lions have been killed as a result.  Prior to the boma installations, the villagers were losing about 3 cows per week from a lion attack. 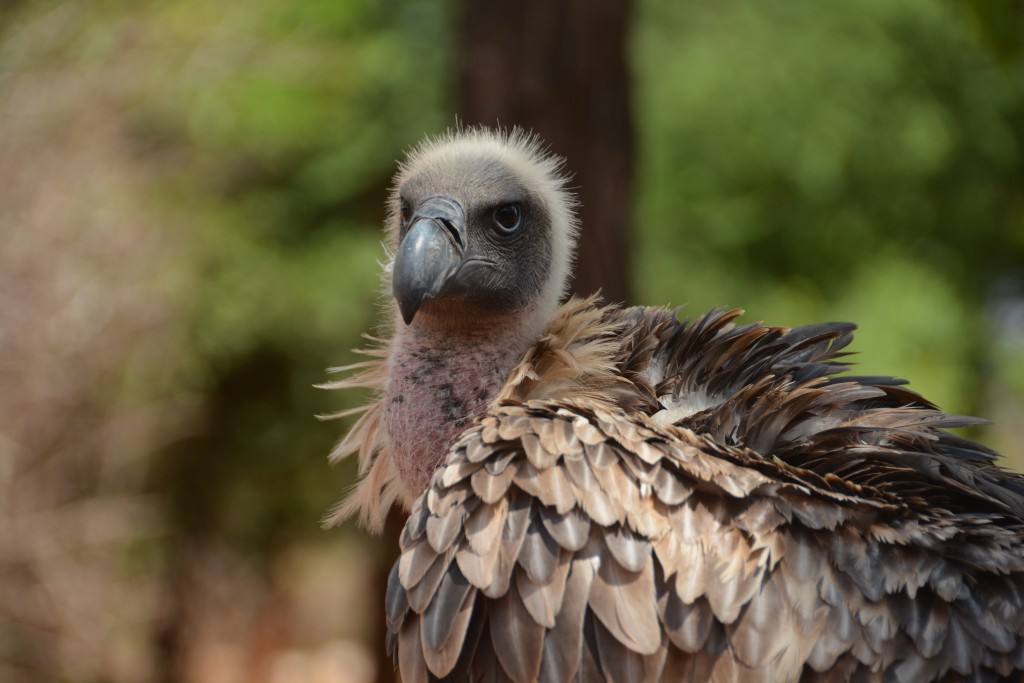 There is also a weekly education program for local school children to introduce them, at a young age, environmental conservation and sustainability.  Through this program many students have been inspired to seek careers in wildlife conservation and some are now employed at Wildlife Trust, proof that the program is successful.

There are many other programs provided by this organization and they even offer internships for tourists who are qualified to volunteer.  More details can be found on their website.

An afternoon visit to meet “Monde” at his home in a local village was enlightening.  Villages consist of many families, each with their own plot of land.  Within that plot, the extended family live together as one community, often in separate circular buildings.  Monde explained that the shape of the building is designed so a snake cannot find a corner, and therefor continues in a circle until it exits – an eerie thought but interesting.  These villagers have, for years, lived in harmony with nature, growing their own crops, taking care of their livestock, praying for rain during the dry season and celebrating when it arrives in the wet season.  They ward off predators, baboons, warthogs, elephants, etc., with barking dogs, fires, loud noises and drums.  Someone from the community is on watch every night.  Women gather water daily and can choose from two different wells.  The closest well, newly drilled by NGO’s, was quite close (less than 1km) but it was rationed to only 2 jerry cans per day per community.  The other well was 3km away but allowed villagers to take as much as they could carry.  Other chores for women include cooking, cleaning and tending to the children.  Men tend to the crops and livestock, sell their products at the markets and many work outside of their village. Within the village, communities barter with food, livestock or work and if they can’t find what they need within their own village they will barter with the next village.  The extended family eat together in a circle.  The men sit on one side and the women on the other.  Once the food is finished the boys are called to collect the plates and any leftovers are free for the taking.  When it was time to say good-bye to Monde, we had a new appreciation for daily life in their village.  I think of Monde often and hope that the recent rains mean that his crops will produce enough to provide for his community for another year. 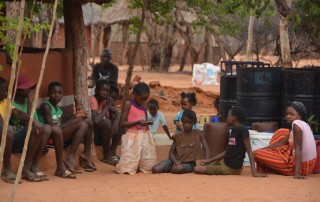 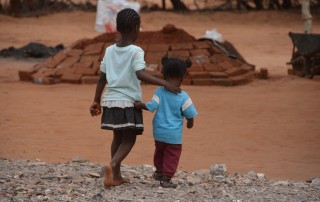 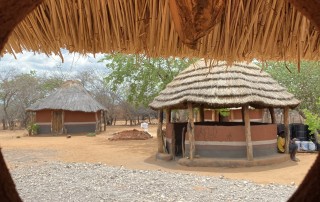 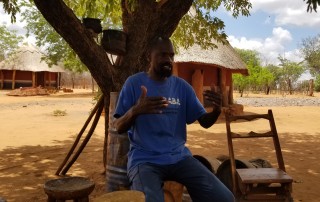 One of my responsibilities when researching a new destination is to visit the various levels of accommodations.  Zimbabwe can accommodate any budget from standard basic properties to ultra luxury lodges and tented camps.  My favourite style of accommodation in Africa is a tented camp and the one I stayed at here was extraordinary!  Yes folks, I had a private outdoor shower and plunge pool overlooking Zambezi National Park where only the elephants at the watering hole could see me!   My king size bed overlooking the vast parkland was very inviting, but first things first – I had a sundowner attend to toast to the end of a spectacular day and a remarkable time in Zimbabwe.

Since returning, Zimbabwe has been on my radar and I recently discovered Akashinga, a group of women rangers fighting poaching in Zimbabwe.  James Cameron has recently directed a documentary about these women called Akashinga – The Brave One.   I can’t wait to see this film and thought you might be interested too.

Bonnie Hinschberger is an avid traveller and a co-founder of Broad Escapes – Tours for Women.

Where the Polar Bears Roam 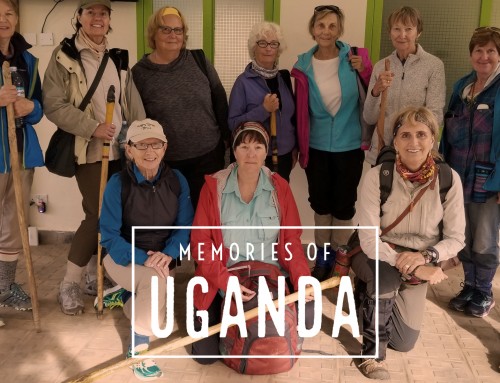 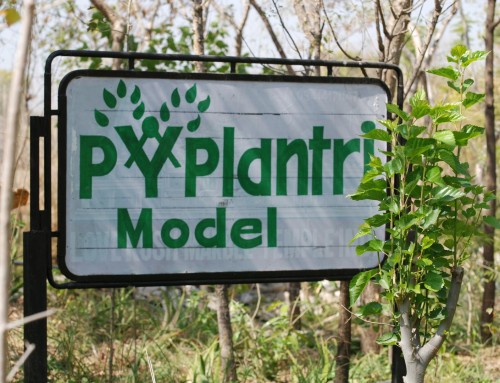 It Takes a Village

Coming Together in Times of Distancing 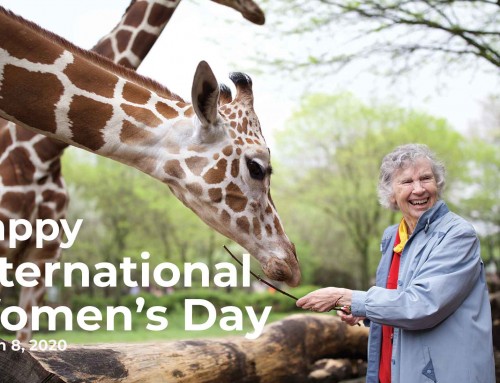